On a wild night out Lishman seduces the beautiful Natasha Rok. Three days later, news of Natasha’s murder is splashed all over the newspapers and Lishman is the prime suspect. Lishman, unable to remember much about the drunken night of passion, makes a snap decision to run. He becomes a fugitive hiding out on the backstreets of London, hunted through underground tunnels and canal networks. With the help of Dani, an edgy female photographer friend, he ventures into the murky world of East End gangs and conspiracy theories to unravel the mystery behind Natasha’s death and try to save himself.

In 2006, the Blum family were brutally killed in their home. Detective Jon Stanton worked the case but was never able to turn up enough to make an arrest. Now, having left the San Diego PD, he still keeps the Blum file in his home. A man facing life in prison is willing to confess to several murders of adult film stars over the last decade in exchange for a deal with the District Attorney’s Office. He claims he also killed the Blum family but insists he will only confess to Jon Stanton. Pulled into a world he thought he left behind, Jon Stanton will face the man he has sought and hated  for years.The Blum case eats at Stanton in a way no other case has. Faced with the possibility of bringing closure to the families of all the victims, he must decide if he is willing to enter the darkness of the human mind one last time. 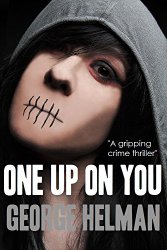 A fitness fanatic turned killer is on the loose in London. Detective Inspector Dave MacDonald is on a manhunt for a serial killer. He is under pressure from all sides. Can his partner Detective Shirley Palmer step up and help catch the murderer before MacDonald finally cracks?
AUTHOR: GEORGE HELMAN
TITLE: ONE UP ON YOU
GENRE: Thriller, Mystery

UK born Lady Margaret Turnbull, the owner of Lawler’s Loft Bed and Breakfast, is a guest culinary judge at a village fete in Bangalow, Australia when a patron drops dead; poisoned after sampling a prize winning strawberry tart. Detective Tom Sullivan investigates and initially diagnoses that Mrs. Davies died from a heart attack. But village busybody and part time woman sleuth Maggie Turnbull has other ideas, which to the annoyance of Detective Sullivan are usually right. “Poisoning is not random. It’s a private, personal affair” is Maggie Turnbull’s credo for which she must untangle a web of lies and secrets that will require her to re-visit a 30 year old case to catch today’s perpetrator.

TITLE: MURDER ON THE BEACH

You are a piece of the puzzle of someone else’s life. You may never know where you fit, but others will fill the holes in their lives with pieces of you. So when making any decision in life, ask yourself: ‘what’s the worst that can happen? Your mind is a powerful thing. When you fill it with positive thoughts, your life will start to change. Never test good people. They are like mercury. They’ll not break when hit. They’ll just disappear from your life silently.